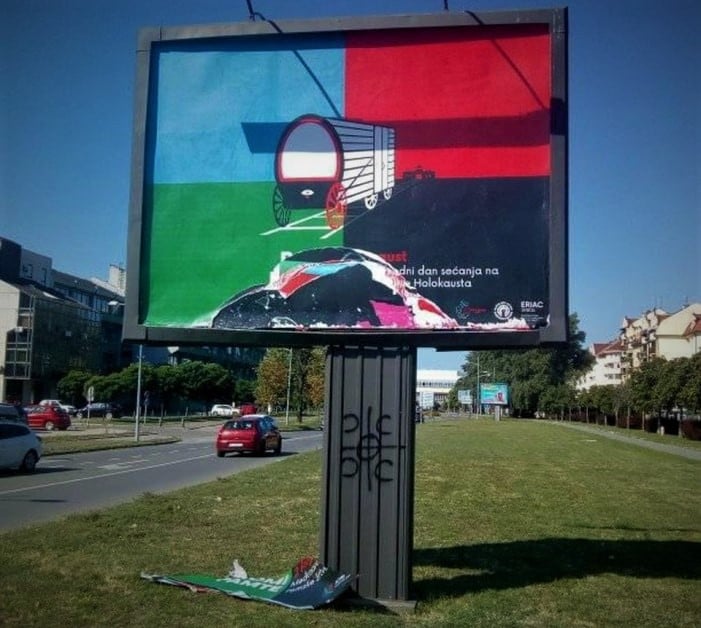 To mark Roma Holocaust Memorial Day this year, Opre Roma Serbia, together with Proud Roma Free Europe and the European Institute of Arts and Culture (ERIAC), erected several “Roma Remember” commemorative billboards around Serbia, including in Belgrade, Nis and Novi Sad. Featuring the Proud Roma Free Europe branding used by our transnational Roma network of international, grassroots and civic organisations, the billboards were designed to drive awareness of this annual day of remembrance. Similar billboard campaigns ran in North Macedonia, Slovakia and Kosovo.

Much to the dismay of the Roma community, on the evening of 7-8 August, the billboard in Novi Sad was defaced, the poster torn, and a Celtic cross was graffitied on the pole – a mark of neo-Nazis. Opre Roma Serbia has since filed criminal charges with the Novi Sad Police Department and Ministry of Internal Affairs. These actions have raised considerable concerns locally regarding the prevalence of fascist ideology, which was responsible for the death of millions during the Holocaust.

Roma Holocaust Memorial Day is an annual day of remembrance to commemorate the Roma who lost their lives during the Second World War. The day holds special significance for Roma, not only on account of the half a million Roma killed in the genocide but also because the community has struggled long and hard to achieve recognition of their plight. For many decades after the Holocaust, governments and various authorities denied that Roma were ever persecuted on racial grounds, and compensation was never forthcoming. In Germany, it was only in 1982, for example, that state authorities officially acknowledged the genocide of the Roma during the Holocaust on racial grounds.

Since challenging that narrative and receiving recognition through Holocaust remembrance activities and museums dedicated to educating people about the Roma Holocaust, 2 August has become an important day for Roma. Europe’s transnational Roma network goes to great efforts to mark the occasion each year, to not only remember the dead but also continue to build on the formal recognition of the Roma Holocaust. This is crucial for Europe’s Roma in fighting ongoing racism and discrimination in the present day. The defacement of the billboard in Novi Sad is tragically only one of many acts of neo-Nazi terror experienced by the community across Europe; Roma more often than not are the target of right-wing extremism.

On account of the defacement of the billboard, Opre Roma Serbia has called on local mayor, Milos Vucevic, to renounce the actions of the neo-Nazis. Describing their act as ‘shameful’ and ‘unacceptable’, the organisation stated that such actions have no place in a city with the title of European Capital of Culture. In a letter to the mayor, the organisation expressed its deep concern over the event on behalf of the local Roma community, and stressed the importance of finding those responsible. ORS further emphasised to the mayor that this incident was not an isolated case of racism. More needs to be done to educate people about the historical suffering of Roma, as well as increasing Roma representation in state institutions such as the police force, according to the organisation.

In response, the mayor and several other officials have commented on and condemned the damage to the billboard.

The following is a statement from Milos Vucevic, Mayor of Novi Sad: “This is an individual and shameful act that does not represent Novi Sad. I expect the authorities to respond and bring the perpetrators to justice. We are proud of the difference that exists in our city. Multiculturalism will always exist in Novi Sad, and we want to encourage peaceful coexistence. Commemorating all victims of past tragedies is important to us in Novi Sad, and we will always stand for peace, respect and tolerance.”

Brankica Janković, Equality Protection Commissioner said, “Let us condemn the defacing of the billboard dedicated to the Roma victims of the Holocaust! Together with Serbians and Jews, Roma are among those who suffered the most in World War II. Therefore, there should be no excuse for those who promote fascist ideas.” –

Finally, Gordana Čomić, Minister of Human Rights said the following: “August 2 is the international day of remembrance of the genocide of Roma and Sinti during World War II. To commemorate these victims is our human duty, as it is our duty to speak out against evil among people.”

Proud Roma Free Europe stands by Opre Roma Serbia and supports the organisation’s call to condemn the acts of neo-Nazis in the strongest terms possible.